A downloadable game for Windows, macOS, and Linux

A game by Tomás Esconjaureguy

Inspired by Quake, Hexen, Unreal and many other classics of the genre, ASKE brings back the fast-paced action and the feelings that you had back in the '90s while shooting and slashing pixelated enemies in a wide collection of scenarios.

Far away, near death

Explore the unique locations of Aske, a hostile planet inhabited by a variety of bloody creatures such as the cleaver-armed Skeanners, the parasite-infected Headnails, the erratic Meatballs, among other living beings and environmental threats.

They shall pay with blood

A whole weapon loadout is at your disposal to make sure every corner is covered with the remains of your foes, turn the corpses of your enemies into [i]gib[/i] pieces and delight yourself with a bloodbath while wielding melee weapons, firearms and even exotic tech weapons like the plasma gun.

The last echo from humanity

Get wrapped up in the industrial atmosphere of Romain Rope's abstract compositions and feel the oppressing ambience of a long forgotten planet.

Enhance the nostalgia with retro mode, a carefully crafted optional setting that emulates the graphic limitations of game engines from the past era.

when I press play it doesnt work (im on mac)

Quake had the luxury of hit animations and pain sound effects, you might want to add some as this is a big oversight in the hit registry and overall "oomph" of the game.

Another issue was particles inconsistency, particularly the blood being overly realistic while the particles shown when striking metal is exactly the same as Quake, it is rather an inconsistency that is noticeable at first sight.

Map design was really nice, but you should have some teleporting enemies sometimes, just to ambush players and not have them relying overly on corner-hugging.

Otherwise, very good game, I'm looking forward to the final release. This is probably the most faithful Quake clone I've seen as of late, the only problem being that it's a little too similar to Quake at times, maybe play a little more with the "blood planet" theme you got going on because that's very interesting! I'll be checking out the final product.

Great controls, may I ask which, if any, asset(s) you are using for your FPS controls?

Hello, this is made in Unity and everything was coded by myself!

Hello! What's the problem exactly? Which platform are you running the game on?

I really enjoeyd this. However i think the meatballs are kinda clunky because they can sometimes get stuck in cornes (and this way you can cheese some sections). But overall a very cool demo. Also nice that there are lots of options and customizations. Weapons feel impactful and precise. Im a big fan of these types of games so im definetly gonna check it out when it's on Steam.

very fun, made a video on it -

A huge improvement compared to the first demo in performance and more detailed graphics but checkpoints and insta-saves/insta-loads are needed . I also liked the music of the first demo more this latest version seems altered maybe it can be put back into later levels , it's still fine though . It would also be better for the levels to have more ambience such as maybe toxic liquid dripping from pipes or when you look up you can see clouds very slowly going over you things like that . The gore effects need to be better like more blood splurting to give more of a retro quake vibe . Also a grenade launcher would be nice , possibly launching proximity electric grenades as secondary to stun enemies within its radius so you can finish them with a more powerful weapon when you can not get a shot with a normal grenade or they are moving to fast or have a third ammo type that would be proximity mines .

Hello! Thank you for playing and comparing the demos! This feedback is really appreciated. One small thing: The grenade launcher is available but hidden in a secret (E1M3)

I had a blast! It's great to run into a quake-like without the ridiculously high system requirement shared by many of such games these days.

Oh, also adding that I ran this game on ubuntu 20.04 through the itch.io client. Everything seems to be working perfectly.

Thank you for the kind words! And I’m very happy it worked for you!

I was attempting to play this game for the first time but I am having major errors when trying to load up after Demo 3.1 came out. Is anyone else having this problem since I was super bummed that I couldn't play the game.

Hello. Which OS are you in?

I am using Windows 10. I think there might be an issue with itch.io so I am going to try to reinstall again.

Finally got the install to work (thanks itch.io for messing up the file locations). I honestly really enjoyed this game. Controls felt great, weapons felt solid especially given the challenges. I wish enemies dropped health or items but given a lot of this game felt like you needed to use your items sparingly, it worked well. Can't wait to see more!

Ah! Glad you managed to make it work. Thank’s for the words :)

Great demo! A few things tho…

The first type of enemies need a better pathfinding because if you are above them, like in a ledge for example, they will run around below you instead of taking the stairs. Switching places, if you are below them, and they are above you, they should just jump down to get to you instead of taking the stairs. When they stop seeing you they behave weirdly, like they forgot where you just where a second ago. Sometimes you kill an enemy near them and they don’t notice.

The rest of the enemies (except the exploding meatball) are too static, it would be cool if they repositioned more often, or oven better, attack you while moving. Perhaps you can implement this behavior based on the difficulty, so instead of making the enemies tougher, they become smarter (or numerous!).

Having the option to change keybindings would be nice. Also, adding a “Select last used weapon” or a “Weapon wheel” would be very useful.

The double-barrel shotgun: did you put falloff damage in it? because I shot a meatball that was covering my whole crosshair (was at some distance from me) and it didn’t die. So maybe it was falloff damage or the spread of the crosshair isn’t big enough to be accurate. Also, nice touch on the reloading animation in the crosshair :D

Melee weapon: It would be fun if you could hit multiple enemies on one hit.

And that’s all I think, over all nice work.

I look forward to the complete game!

Thank you for such detailed feedback and for playing the game!

I loved the demo

The design is really on point, so is the ambiance. Sound, level design, bestiary and weaponry wise. Feels good to have french translations as well.

Really looking forward the game to be completed :)

Very nice demo, loved the feeling of the weapons, you realy nailed the Quake feel. Maybe a lack of feedback when hitting the enemies (sound design ? enemy animations ?). I found the meatballs to be quite original enemies and their encounter was memorable.

Alright gotta say I loved your game. It has been added to my new up and coming boomer shooters review

A very promising start to the game :)

Definitely some potential here, would say that the shotgun needs some more range, just feels very weak when it takes 3 shots to kill the basic long-range enemies. All in all, Nice demo

Feels like a genuine sequel to Quake 1 with bits of Q2 added into the mix for good measure. Nicely done!

Nice game bro, I really like the enemie designs and I am a big fan of quake! Will the enemies have names?

They do have names!

Skeanners: Guys with the blades

Ragzoids: The mummies in the second map

the level design can be work on, the enemy's are :/

thank you for making this game,

Reply
TsukuruHouse1 year ago
it was good
Reply
selewi1 year ago

Thanks for playing and sharing this video!

Thanks for playing mate!

Thanks for plaaying and sharing the video! Cool gameplay :)

Really nice demo, guns feel good, enemies are creepy and combat is well made. Meatballs are a bit annoying - during the first encounter they spawn a bit too many for too long. They would work better if they were spawned and hurled by some kind of enemy.
A bit too much crawling through pipes - gets old after several attempts on higher difficulty.

Game needs checkpoints throughout the level - wouldn't have to repeat so many crawling sections.

The blade could have a slightly longer reach.

SSG is great, although some kind of visual cue would help indicating when it's ready to fire again. Even as simple as just hiding it down for the duration of the cooldown, like in Dusk.

I would add something to indicate that player is down on health - maybe a heartbeat or slightly pulsating red vignette.

Option to rebind keys would also be nice.

Hey David thanks for the detailed feedback! I'm going to make sure to have it in mind for future updates

i was gonna say the same thing lol

I love this! I found out about your game while browsing around for good FPS games on itch. Absolutely stunning and faithful Quake-like style game. I tried my hand at making one a few months ago for a jam, but it doesn't come close to this in terms of quality. Super solid and reminded me of the first day I loaded Quake up on my PC back in the late 90s! Very excited to see what new developments are made moving forward.

Thanks for the kind words! I'm really glad you liked the game :) Stay tuned!

What a beautiful love letter for all retro shooter fans! It is blast to play. Smooth and responsive controls, awesome atmosphere, crispy low poly graphics and OMG... this retro filter...

Thank you very much tobias! I'm happy you had a good time with the game :)

The fish from spongebob have really hit some hard times.

Hey thanks for playing and sharing this gameplay!

My pleasure! It's reallly well put together! :{D

Thanks for playing it guys! And for sharing this video

Thank you for playing and uploading this!

- the shotgun has no spread and very poor range

Thank you for playing the game and sharing it! I'm really glad you liked it

what engine did you use to make this game?

It was made with Unity 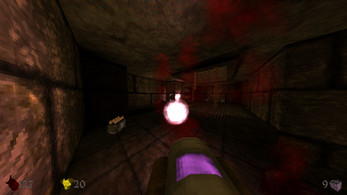 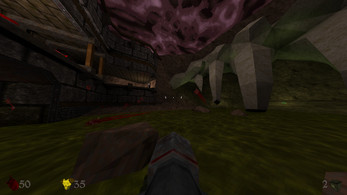 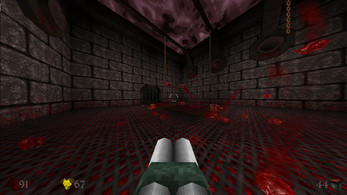 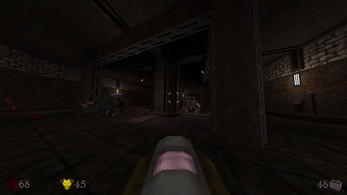 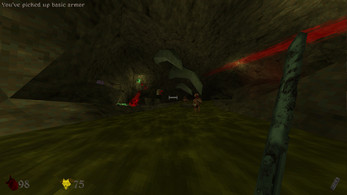